I was recently exposed to an issue with electrical panel loads that illustrated what I feel are unique characteristics of how Revit circuit loads and Load Classifications affect the values that you see on the electrical panel schedule.  If everything is utilized in Revit exactly as Revit is designed and intended, everything works fine.  However, that rarely happens.  Engineering firms create and customize families, and change or set Load Classifications which can impact the proper loading calculations.

Many companies have electrical panel schedules which display the Loads Summary at the bottom of the panel.  This summary section separates each Load Classification into its own line so that you can see how much Connected Load exists for each different type of Load Classification and the Estimated Demand for each Load Classification.  Those load values are then displayed as the Total Connected Load and the Total Demand Load that should include everything on the panel.  The Total Connected Load is then displayed on a Switchboard panel schedule from which that panel is served.  There are many different variations of how this information is displayed, but the general process is the same.  Subpanels may also be involved, but the same issues exist with those loads.

In reviewing the issue, there were 2 different problems that were manifested in the panel loading.  This article is an attempt to describe those 2 problems to help others understand what may be happening when load numbers don’t add up.  I recommend everyone read the Autodesk Knowledge Network’s explanation of how Load Calculations are supposed to work.  Read it at About Load Calculations.

Now to break down some issues discovered.

Some items on the electrical panels had not been truly circuited in the model.  A “Spare” had been added to the panel and then the description of the circuit had been changed from “Spare” to the desired item.  The desired load value had been added to the leg (A, B, or C).  This gave the appearance of the panel having correct loading on each leg as the leg totals at the bottom of the panel added up correctly.  (For instance, in Figure 1A, all values under the “A (V/A)” heading correctly add up to 6800.00 VA at the bottom.)

Adding Spares to represent loads on panels is a common occurrence for companies as a method to “cheat” Revit into showing what they desire on the panel.  Sometimes, the entire panel schedule is made up of Spares with their descriptions renamed to fake a panel schedule.  While this may look fine if you do not include the load totals, it is not truly Building Information Modeling (BIM) and is not accurate.

Result of Problem One:

The Spare connected load is NOT part of the displayed Total Connected Load parameter shown on the panel unless specified in Manage -> MEP Settings -> Electrical Settings -> Panel Schedules -> Include Spares in Panel Totals.  However, that does not really resolve the problem created by using the “Add Spare” command as the following section about Switchboards illustrates. 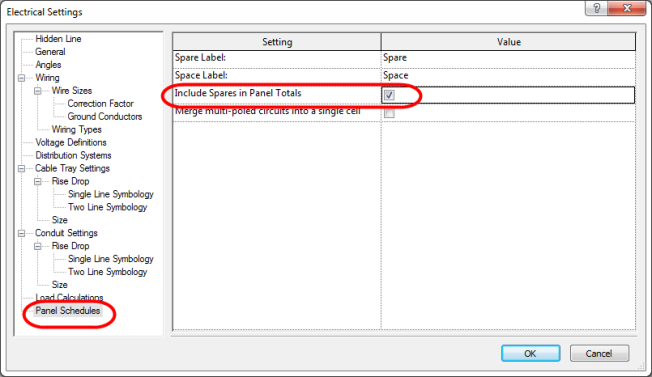 Some items on the panel were assigned the “Other” Load Classification for the electrical connector in the family.  These are items on circuits 8, 11, 14, 17, 20, and 22 of panel P3.3.  The family used for the IDF ACCESS CONTROL item had an electrical connector (with one single pole circuit) with a 500 VA load assigned to it, so it displays correctly on the appropriate leg.  A similar family was used for the BMS and LCF items (circuits 20 & 22).  The result of this was that it gave the appearance of the panel having correct loading on each leg as the leg totals at the bottom of the panel add up correctly.  (In Figure 1A, all values under the “A (V/A)” heading add up to 6800 VA at the bottom.)

The “Other” Load Classification is used by OOTB Revit families, but it is  used on Electrical Equipment that simply pass loads through them and are not the terminal device that generates the load.

Impact on Other load transfer to Switchboard:

Figure 2A above shows the branch panel P3.3 load on the Switchboard SB3 above to which panel P3.3 is connected. 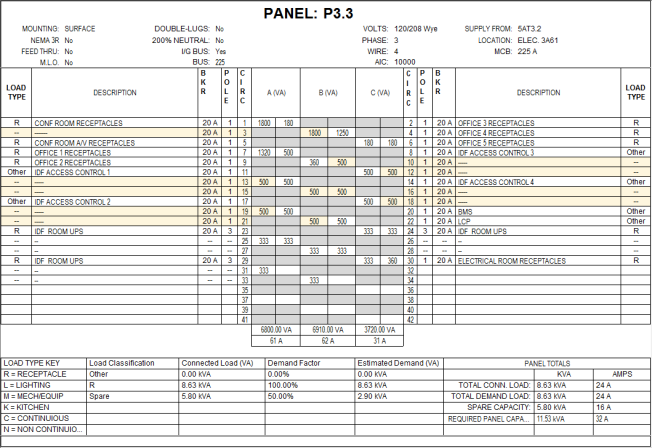 Most Viewed Posts of Last 2 Days